Is NOT getting a Prenuptial Agreement Harming Your Marriage? 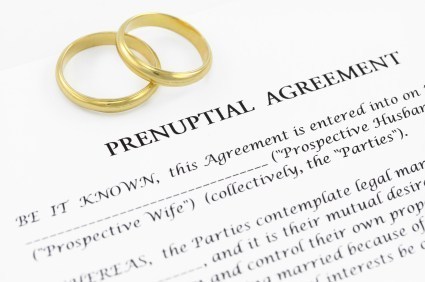 Is NOT getting a Prenuptial Agreement Harming Your Marriage?

Marrying couples often don't want to get a prenup because it means having a difficult and unromantic conversation at a time that's supposed to be about love and joy. In other words, the messy financial matters get in the way of romance. Might I humbly suggest the possibility that romance is getting in the way of a serious financial decision? When you get your marriage certificate from the courthouse, it should be clear that you're not just entering into a relationship that is about love and romance. There are very real legal ramifications that result from your legal marriage.

It d be an understatement to say that many married couples have tension over their finances. If nothing else, going through the process of preparing a prenuptial agreement forces otherwise reluctant couples to talk about their financial future. Too many couples get married without answering even some basic questions about how they ll handle their finances in the future:

People spend large amounts of time reading the legal terms of the other big financial decisions we make in our lives. When you buy a car, hopefully, you take some time to read the contract, the terms, the interest rate. When you buy a house, you read the contract and settlement statement closely. When you buy stocks, you research the company. A divorce can ruin a person financially. A marriage gone bad can affect more than 50 percent of your finances. Isn t it worth taking the time to investigate the financial terms under which you ll get married?

Attorney Aaron Thomas began his legal career in 2002, as an in-house staff attorney for Habitat for Humanity International. He then honed his trial skills from 2004 to 2007 at the Dekalb County Public Defender's office, rising quickly through the ranks, representing hundreds of indigent clients facin...